Disqualified housemate at the ongoing Big Brother Naija ‘Lockdown’ show, Erica have been slammed for making her first appearance on social media with Kiddwaya right by her side.

Laycon who is still in the reality show.

sent home and social media world reacted to the news as everyone share their candid opinion.

With Kiddwaya also evicted the following Sunday, all eyes were on both housemates

many expected what they saw.

With housemates left at the ongoing show having their Saturday party, Erica was

her side the stage was set for a romantic time.

first appearance should not have been with Kiddwaya.

According to the fans, Erica should not.be stepping out with Kiddwaya who is only

using her to chase clout as the billionaire son have denied her in public.

Kiddwaya attached to it as the billionaire son is only catching cruise with her.

Using former participant at the show, Mercy and Tacha as an example, the fans

noted that her first appearance should have been strategic and big enough to show she’s the real deal. 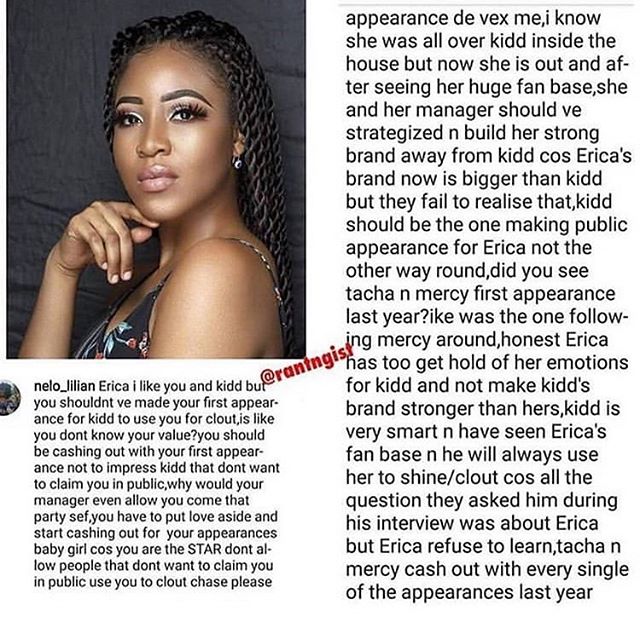 #BBNAIJA : Mercy bought the four-bedroom duplex, its was not a gift – Billionaire wife Ichechi Okonkwo clarifies