Home Entertainment Celebrities #EndSARS: Bobrisky tackles fans calling him out for not protesting

Controversial cross-dresser, Idris Okuneye popularly known as Bobrisky have sent a strong message to fans who are calling him out for not joining any the EndSars protest.

As reported yesterday that award winning singer and songwriter, Falz and Runtown

an end to the operatives.

READ
Baby shower Is Another Form Of Witchcraft-Counselor Alleges

Bobrisky have now spoken out after some fans who are not.pleased with his move

called him out on his official social media platforms.

Not too pleased with the criticism he’s received from fans, Bobrisky addressed the

issue by slamming fans who are trolling him got staying home while others are protesting.

their intention known themselves as they are not cripple.

for their preferred housemate who will end up jinxing them in the future.

Bobrisky however heaped praise on Tiwa Savage, Toke Makinwa and other big

names that joined the protests as he pray they continue striving.

See Bobrisky’s message to fans below: 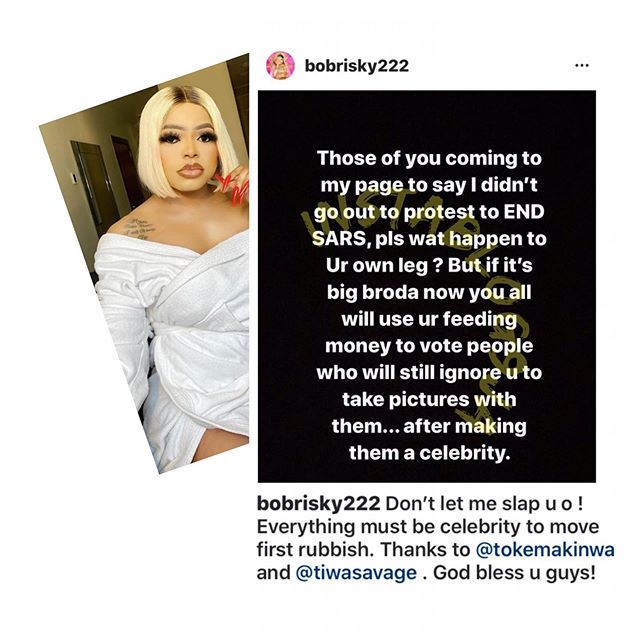 Violette Johnson - October 28, 2019 0
Nollywood actress Ini Edo shared a lovely picture on her Instagram page which has got her fans talking. The award winning actress who is endowed...

Violette Johnson - October 14, 2019 0
Not many people get to see the sexy part of Eva Alordiah maybe all because she covers up most times while performing as a...

James Antwi - October 22, 2019 0
Former Big Brother housemate, Kim Oprah left nothing to the imagination of viewers, as she stepped out in a see-through  bodysuit in a latest...