Talented Rapper, Ycee has called out media personality, Solomon Buchi over the controversial message he wrote to his soon-to-be wife.

Solomon had got people talking after he took to his Instagram page to pen down some words to his fiancee, stating that she’s not the most beautiful or the most intelligent but he has chosen to never find perfection in anyone else.

Solomon also promised to put his gaze on her and mold her and also revealed that his description of his woman is a realistic base for real love and an acknowledgment that his wife isn’t the best, but he isn’t looking for the best in her.

However, Nigerians took to their keypads to bash him as they stated that he is wrong in all shades

It also didn’t sit well with the rapper, Ycee as he also took to his Instagram story to react as he slammed the media personality.

Countering the message, Ycee advised Nigerians to marry someone that likes them and sees them as the number one person in the world against Buchi’s statement. 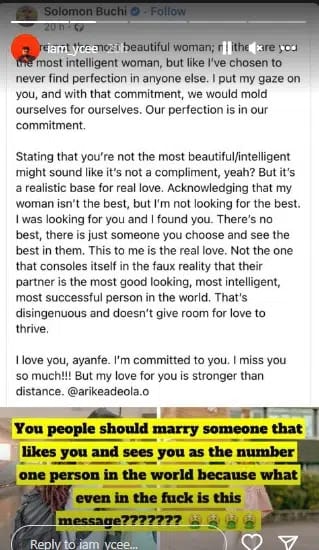