Yeah I agree, some fans and followers on social media are just notorious like that, it is understandably in their DNA. Sometime in July this year, 24th day to be precice, a fan simply known by twitter handle ‘@swankyd _’ had made a bet by tweeting to Nigerian singer Asa that if he tells her that he loves her and she replies with sexy gesture, that he would frame her response and flaunt it in his room for keep. 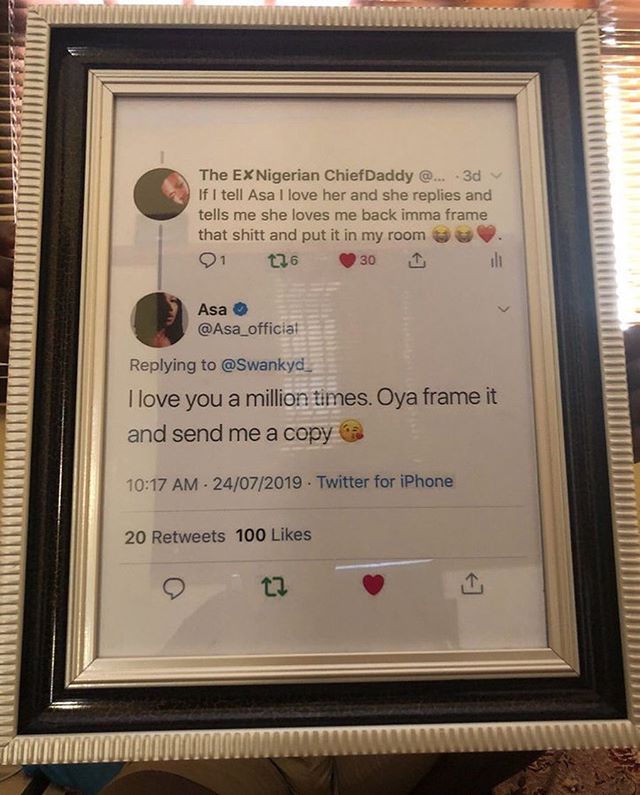 And surprisingly, the singer responded via her verified official twitter page @Asa_official that she loves him a million times, and that the fan should go ahead to frame the response as he promised. And so the guy had done the needful by making good on his promise to Asa. See the full framed chat below:

Adedokun Moses - June 30, 2020 0
Nollywood actress and filmmaker, Chika Lann is back on social media and this time with more sultry and sexy pictures that can turn heads. Chika...

#BBNAIJA: Do not dwell in your past and always embrace yourself – Thelma Ibemere...

Violette Johnson - October 26, 2019 0
Ex BBNAIJA house mate Thelma Took to his ig page to advise her fans not to dwell on there past and learn to embrace...