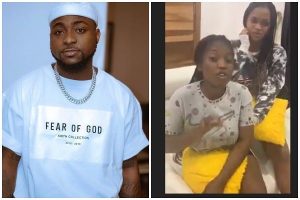 President buhari Fan came hard on popular musician, David Adeleke aka Davido, for handcuffing and parading two women who had jokingly accused him of impregnating one of them.

Davido’s hype man, known as Special Spesh, had posted a video on Instagram showing the two women, Helen and Susan, handcuffed and sitting on a chair in a living room.

However, some of Buhari’s supporters on social media reminded Davido how he attacked the President during the Osun governorship election but was never touched

Spesh could be heard telling one of the ladies to lift up her head or get a slap in the face. Davido also shared the video, defending the action of his sidekick.

They accused the musician of being a hypocrite and abuse of power.

Mr Kayode Ogundamisi, Tweeted that Davido would have abused power if his uncle had emerged as the governor of Osun State

He Said, “Imagine Davido as first Cousin in Osun State with his uncle Isiaka Adeleke as Governor and Buhari is meant to be the tyrant o!”

Another Buhari supporter, Jack Obinyan, said Davido should have left the women alone after they apologised for the prank.

Davido is crap! Who arrested him for all the nonsense he said during the Osun elections? I dislike this guy