Stonebwoy who shared the same stage with the renowned reggae legend at Portugal during the recently ended Afronation Concert, released photos of themselves having conversation and exchanging pleasantries.

This is arguably the most trending topic on social media at the moment.

The BhimNation President Stonebwoy, aftermath of his exceptional classic performance at the world-eyed stage, met up with  the top star.

It’s obviously that Stonebwoy meeting the Grammys awardee will lead to both legends logging into the studio for a top-notch collaboration for their fans.

Stonebwoy has performed successfully in three different European countries and have met world superstars like Elephant man, Beenie man and the latter Buju Banton, indicating how well his ‘Shuga Europe Tour’ is progressing. 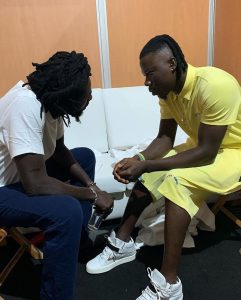 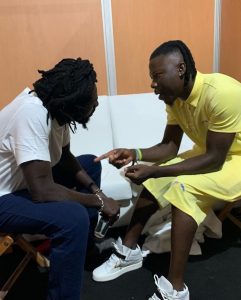 Buju Banton is a Jamaican dancehall and reggae musician. He is widely considered one of the most significant and well-regarded artists in Jamaican music.

Banton has collaborated with many international artists, including those in the Hip Hop, Latin and punk rock genres, as well as the sons of Bob Marley