Home Entertainment You need to let a woman miss you as Women thrive under...

Nigerian OAP Dotun moments ago took to his Instagram page to give some relationship tips as he gives Nigerian Men Candid  Advice about women.

In His words Dotun says its better for  men to allow women miss them as its there own way of Thriving under Mystery.

Dotun Further noted that, the moment a woman can figure everything about you then

there is no more spark and then that man becomes boring to them which is popularly known as see finish.

Sometimes , just a little space and controlled Attention like been Lover Boy during the day and bad Boy at Night.

Dotun concluded by also saying its either men are Ben 10 or Teletubies, woman wey go like you, go still like you.

Everything has its own advantage , but he did say he rather been a Ben 10 than a Teletubbies. 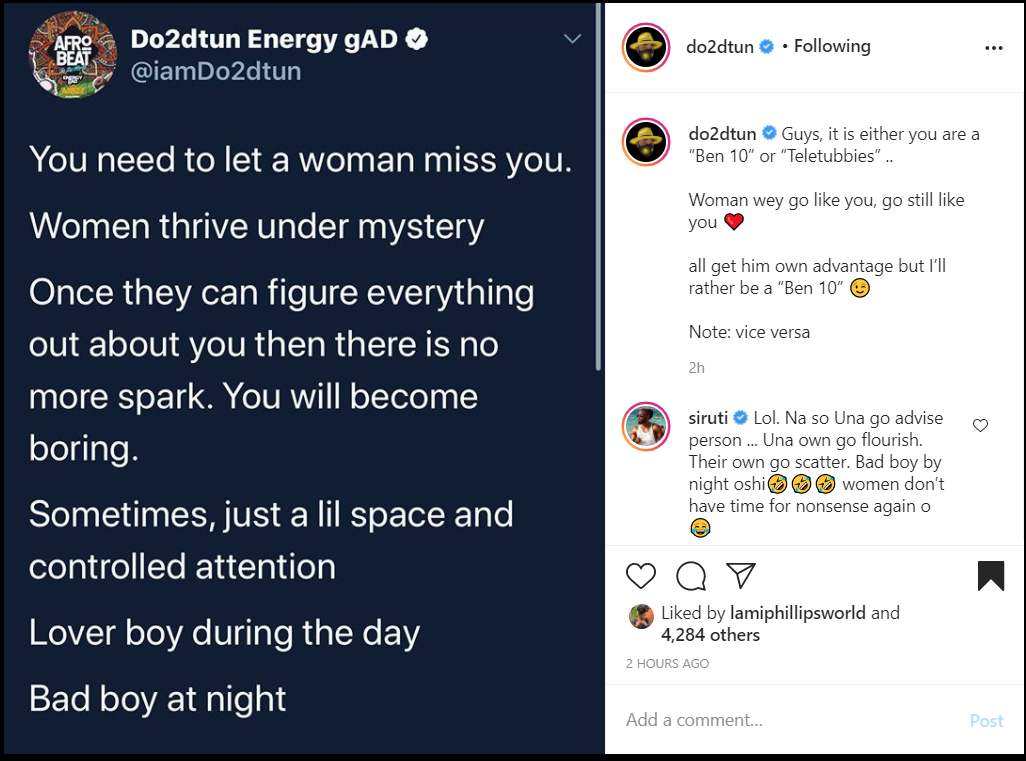 for Ozo and the way Nengi has been treating him.

on Ozo after the In house Lover Boy professed his Love for her again.

Adedokun Moses - July 5, 2020 0
American singer, songwriter and entrepreneur, Kanye West have declared that he will be running for the 2020 Presidential Election. Kanye West have no doubt touch...

This new week, May we bloom and be fruitful- Actress Nancy Isime wish her...

Adedokun Moses - June 11, 2020 0
The big brother naija reunion show is getting more intense on a daily basis as Mercy and Omashola gets involved in an heated alteration...

Violette Johnson - September 30, 2019 0
Billionaire entrepreneur and Philanthropist, Tony Elumelu shares a picture of one of his beautiful daughters who is adding a year today. He captioned: "Happy birthday to...