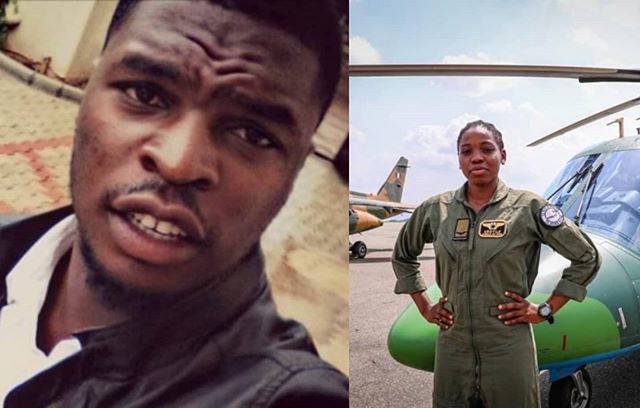 Ibikunle Daramola, air force spokesman gave the name of the man as

Nigerian Air Force base in Kaduna to visit the wife of a squadron leader.

assignment when the sad incident occurred.

The statement reads in part:

“It was while she was returning from the Mammy Market at about 4.30pm that 3 of

her former schoolmates at the Air Force Secondary School, Kaduna;

drove past her in a Kia Sorento SUV,

It is noteworthy that Messrs Adejoh, Folorunsho and Gbayegun are all civilians.

Upon recognising their ex schoolmate, Adejoh, who was driving, reversed the

vehicle, ostensibly in an attempt to quickly meet up with the deceased, who was

walking in the opposite direction.

In the process, the vehicle struck her from the rear, knocking her down with significant

force and causing her to hit her head on the pavement.

The vehicle then ran over parts of her body as it veered off the road beyond the kerb and onto the pavement, causing her further injuries.

was confirmed dead by the On-Call Doctor at the 461 NAF Hospital at about 4.45pm

The trio were immediately detained as investigations began.

substances were found in their systems.

It was however discovered that Adejo did not have a valid driver’s license.” Daramola affirmed that the case would be transferred to the police for further investigation.

I don’t flaunt my wealth on social media because it’s tacky – Seyi Shay...

Adedokun Moses - June 19, 2020 0
Nigerian singer, Deborah Oluwaseyi Joshua popularly known as Seyi Shay, has revealed why she doesn’t flaunt her wealth on social media. According to the ‘Yolo...

Regina Daniels celebrates her brother with the tag ‘prodigal son’

Violette Johnson - December 31, 2019 0
Maybe she was being too pompous while addressing her brother, Regina Daniels could feel she is entitled to call her brother by whatever tag...

Violette Johnson - December 8, 2019 0
Not many wouldn't imagine how good an artiste like Wizkid especially when it's coming from a South African music icon like Cassper Nyovest who...

Adedokun Moses - May 6, 2020 0
Media Personality, Nancy Isime has dished out another sexy pictures that showed how fashionable and sexy she is. Nancy Isime is no doubt one of...