Bodacious actress, Princess Shyngle who has lately been in the news over a photo she took with her alleged Lesbian partner.

In the that was splashed all over internet surfaces, the Ghanaian-based Gambian actress and socialite was seen with her assumed partner who was kneeling and facing Princess Shyngle ‘vajay’ which garnered lots of controversies on social media and even made people believe that the two could be lesbians. 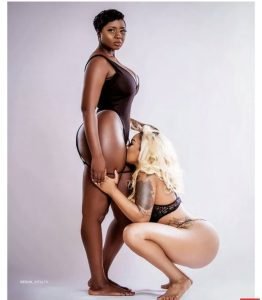 But according to the actress, she’s not to be moved by the tags them and has reacted to those claiming she is a lesbian.

In a post on popular micro-blogging site Instagram, she shaded her critics that whatever they think about her, she is got no time to clear it up.

READ
My Fiancee Got Arrested, 4 days after I got Pregnant - Princess Shyngle (Video)

She shared a short video of herself and captioned it;

“People’s opinions about your life doesn’t define who you are ??????”.

Princess Shyngle is famous not only for roles in movies she acts but also because of her almost perfect Barbie figure. Many have described her as a woman without bones or intestines.

Actress Jinad Adunni urges other female celebrities, “…do whatever makes you happy!”