Hushpuppi’s case with the FBI have become the hottest topic in town as everyone in tge country are awaiting updates about his arrest.

The Instagram socialite have now been reported to be facing extradition back to the country in the coming days and Kemi Olunloyo was the first to break the news as usual.

The controversial journalists who seems not pleased with The Nation Newspaper taking all the accolades for the news as she noted that they couldn’t even report the death of Abba Kyari who died some months ago.

“Wellness us when a leading newspaper is Transparent. News is suppressed in Nigeria. I was the first to break this story to you and will not stop with the details. ??
@thenationnewspaper
STOP SPREADING #FakeNews. U couldn’t even report Abba Kyari’s death when it actually happened. HushPuppi cannot be EXTRADITED to Nigeria. He’s not a Nigerian citizen anymore.” 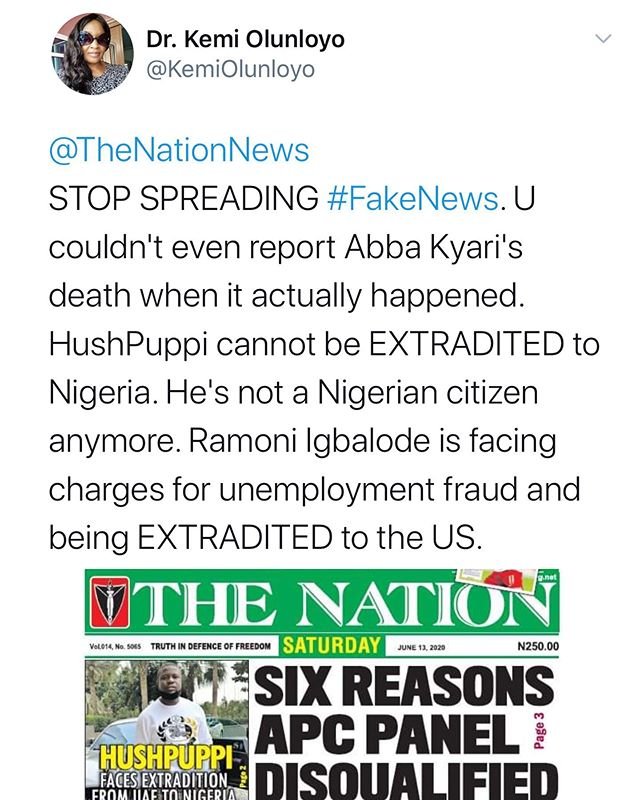 Kemi Olunloyo has not been shy in speaking out against anyone in the country and this has got her enough trolls on her social media handles.

She’s quite popular for attacking the likes of Davido, Tacha and a host of top celebrities in the industry.

Ghanaian actor John Dumelo gets Vote of Confidence from a fan

Kemi Olunloyo is shaking tables, asks “what does Bishop Oyedepo need 9 Bodyguards for?”