Home Entertainment Don’t manipulate people into giving you things because you are popular —...

Nollywood actor and filmmaker Femi Jacobs have shared a word of advise to fans and followers on how they tend to extort money from celebrities.

whenever they share an update about themselves on the internet.

manipulate and pressurize people into giving them money because of their popularity.

because a fans is asking something they can’t afford. 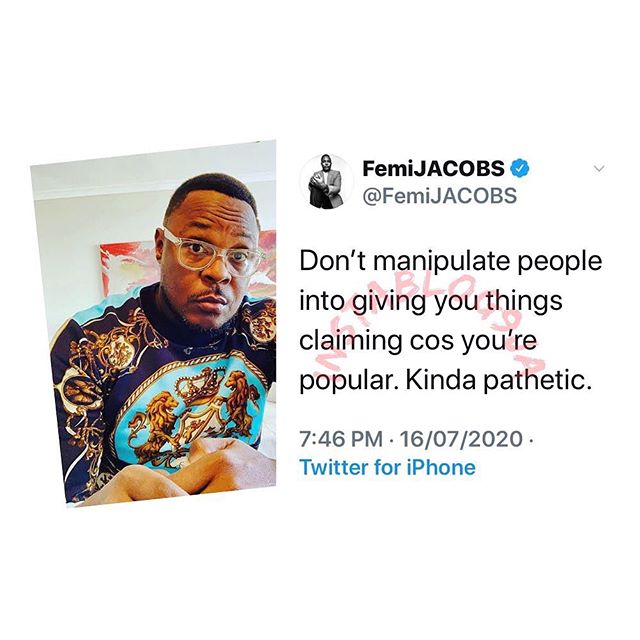 Celebrities in the entertainment industry have been a subject of trolling in the past few days and actress Toyin Abraham silenced some who asked her for money.

The fans had asked Toyin Abraham to pay their house rent, she however slammed them as

she ask if she’s picking money from the ground.

surprise  to the fans who asked for such favor during this torrid time.

will stop trolling celebrities who are also striving hard to meet end needs.

Violette Johnson - October 4, 2019 0
Probably reflecting on getting inspiration for his next song or just having some downtime, Tekno seems to be having a good company with a...

Adedokun Moses - June 14, 2020 0
Nigerian singer and songwriter, Samklef has declared Dubai-based Nigeria big boy, Hushpuppi as the country Robin Hood. It's no longer news that Hushpuppi has been...

Adedokun Moses - June 23, 2020 0
A good news have finally arrived from the camp of Davido and his engaged girlfriend Chioma, as his brother, Adewale Adeleke update fans on...

‘Most amazing feeling’ – Teebillz says as he works out with his adorable son...

Adedokun Moses - June 24, 2020 0
Popular talent manager, Teebillz is not taking the role of fatherhood for granted as shares an emotional time with his first child. Ever wondered having...