Award winning singer and songwriter, Harrysong has taken to social media to bless the face of his fans with an hilarious throwback picture. 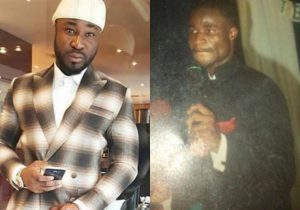 Though it’s not Thursday, a day mostly known for throwbacks, Harrysong took

time to get his fans on the toes with the hilarious picture.

in a black suit as he ministers to the church in Warri.

Harrysong who also could not hide the excitement on how things have changed captioned the picture with an inspirational quotes.

He advised fans to keep believing and never stop believing.

The former Five Star Music signee has won himself some notable awards eversince he burst onto the big scene and does not seems to ve slowing down anytime soon.

His determination and relentless effort have seen him collaborate with legendary artiste as well as dishing out hit tracks and albums.

on his social media platforms.

Recently, he announced that he will be giving out some free hand sanitizers to

help prevent the further spread of the deadly Coronavirus.